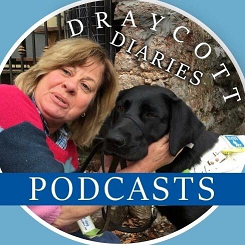 This time, I’m pleased to feature Tiggi Trethowan who now has developed almost total sight loss. Her story and thoughts on the traumatic impact is inspirational and she is a welcome addition to the podcasting community.

There are 350,000 people in the UK with significant visual impairment and much could be improved in how we support them and offer emotional as well as practical support.

Tiggi has had an eclectic career in Television and Film Production.  Her credits have included 10 years as the Event Manager for BBC’s Antiques Roadshow.  As a complete contrast she worked with Bear Grylls on the Discovery channel “Man vers Wild” series taking her to some of the remotest jungles and highest mountains in the world.  Often referred to as “Intrepid” by her fellow work colleagues it seemed nothing could stop her enthusiasm for everything challenging.  Then it all changed;

Ten years ago, Tiggi was diagnosed with a rare eye condition.  In 2017 she had to pull away from Television because her perception was “jump before you are pushed” All her work was on a contract basis so she was easily disposable.  She has always wondered about big organisations and their approach to disability.   Living and working with disappearing sight often felt stressful, lonely and unsupported. With a remain but ever diminishing ten percent sight Tiggi has changed direction.  A guide dog called Jackie has entered her life breathing confidence and more mobility to her life.  She has produced a successful Podcast series called Draycott Diaries  https://www.draycottdiaries.com/.  Recording over 20 life stories with members of her community in a gorgeous Somerset village.  She is also an Ambassador for the Guide Dogs charity and begun a new venture recording life stories with other friends challenged with sight loss.

Going forward Tiggi would like to high light the need for easy, accessible and emergency emotional support for those processing their sight loss diagnosis.  And having felt unsupported by some larger organisations in the past, how we change their perceptions and fears of working with blind and visually impaired people.

My thanks, as always , to https://www.albadigitalmedia.com for technical support in the production of this podcast.

Look to SPEAKPIPE on the front page to, with one click, give quick feedback and ideas to the programme.